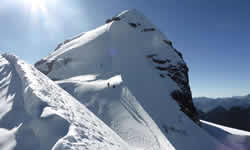 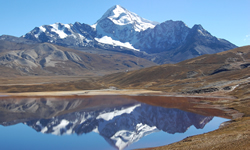 Climbing Alpamayo Huayna Potosi
HUAYNA POTOSI (6.080 m), is located 25 km from the city of La Paz. The mountain is crowded. Its normal route easily accessible by road La Paz - Zongo. The mountain of Huayna Potosi joins the line of the Cordillera Real peaks by a string of minor but abrupt. Huayna Potosi has a special attraction, an aesthetic appeal for the mountaineer. In recent years, the normal route has been climbing hundreds of times per season, which is comparable to Huascaran in the Cordillera Blanca of Peru.
The best time for climbing in the Cordillera Real is between the months of May and October, when rainfall is minimal and the skies are fairly clear. 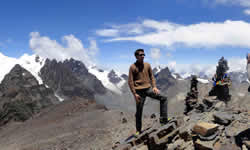